Do Red-throated Divers moult in the Baltic Sea?

Researcher Ib Krag Petersen from Aarhus University (Denmark) has started a project to explore occurrence of the sea birds in German offshore-wind farm areas. Related to this, small tracking devices (geolocators) have been attached to Red-throated Divers breeding in Finland.  Geolocators are outside the read ring and can be read with telescope or from photographs. Weight of the ring is only 4,78 grams. Locations are based on measuring the day length and the time of the noon. Information can be read only if the bird is caught again after the migration period. Birds can be captured only from the nest during the incubation period. 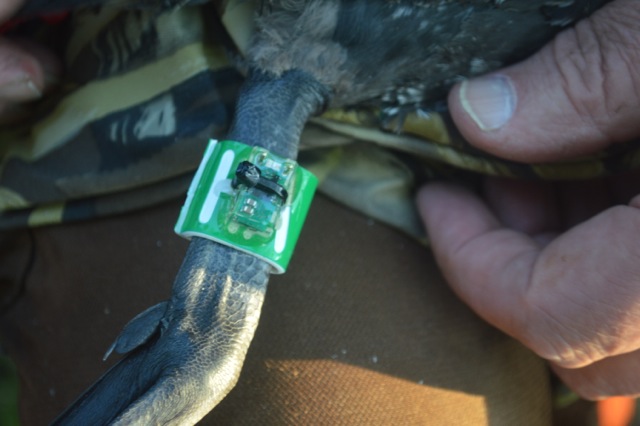 Information from the geolocators was used to determine staging and wintering areas used at least for two days. Autumn staging areas were well covered, but spring staging areas were more difficult to identify. The most important reason for this is the proximity to spring equinox, which causes uncertainty in longitude. In addition, migration in spring is much faster than in the autumn. 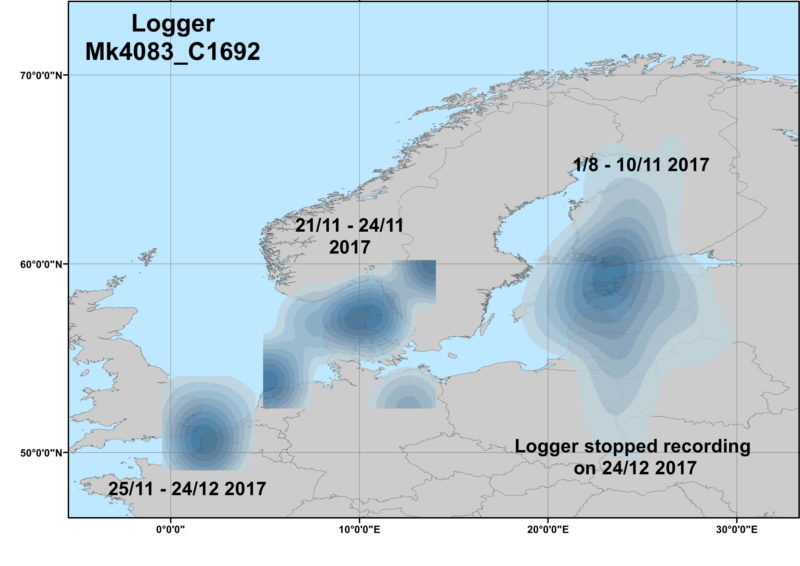 The autumn migration of the Red-throated Diver female from Raasepori during winter 2017/2018.

Female from Raasepori (with read ring code CU) was equipped with geolocator in spring 2017. It moved from its breeding lake to Finnish Gulf on 1st of August. During august it still visited the breeding lake, but migration further did not start until 10th November. The next staging area was in Danish straits 21.-24.11. From here it moved quickly to English Channel area, where it stayed from 25th November to 24th of December, when locator stopped working. In spring this individual was recorded flying over the frozen breeding lake already on 19th of April. This individual bred in the same area as the one that was recovered in Montenegro. 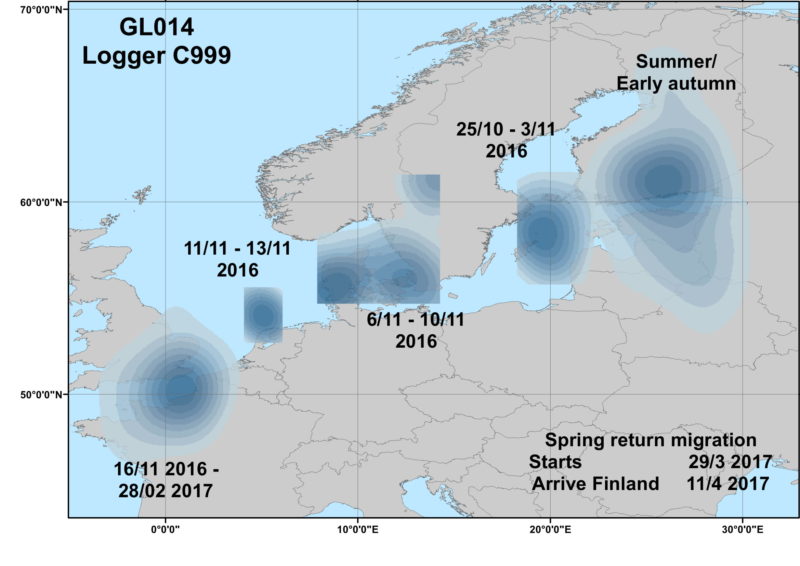 The migration of the Red-throated Diver female from Lammi during autumn and winter 2016/2017.

In spring 2016 Red-throated Diver female was marked with green HA-ring and equipped with geolocator in Lammi. This female started its migration from Finnish waters in September-October. During November it moved to Baltic Sea and continued to Danish Straits. In the North Sea it stayed for a while in the wind farm area.  From here it moved to its final wintering area in English Channel area on 16th of November. Spring migration started on 29th of March and it returned to Finnish waters on 11th of April. Breeding lake became ice-free on 1st of May and the female was recorded there on 3rd of May. 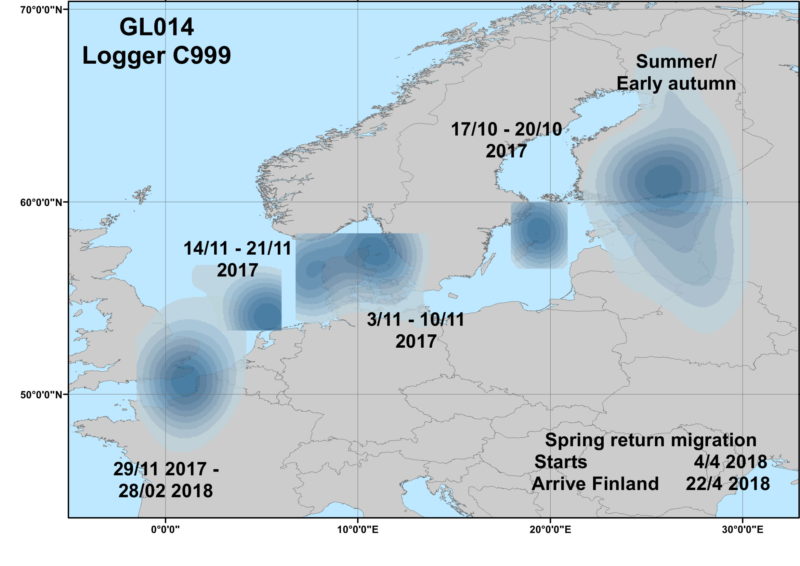 The migration of the Red-throated Diver female from Lammi during autumn and winter 2017/2018.

In autumn 2017 migration started from Finnish Gulf in September-October, where the female migrated to the Central Baltic Sea for couple of days. From here the journey continued to Denmark, in Skagen waters. This was followed by a one week staging period in the North Sea and the migration continued to the wintering area in English Channel. Return to breeding areas was again swift and the female was recorded in the breeding on the 26th of April.

In spring 2017 the female was not captured, since during the catching effort it was attacked by Goshawk. On the following year female was successfully caught and the geolocator was removed. The female was carrying the locator the from 23.5.2016 to 15.6.2018.

In all these three migrations there was a staging period in September-October in the Baltic Sea. The reason for this might be that the Red-throated Divers need to fly a lot during the chick feeding period and therefor their flight feathers are heavily worn. In the early stages of the migration the birds become flightless and move realtively little during the period of c. 3 weeks. These staging areas are therefor probably also their moulting areas.  Phenology of the migration is very similar in all these three cases. The start of the autumn migration is in September, the birds arrive Danish waters in November, from where the birds move to English Channel area for the mid-winter. Possible wintering area is the Outer Thames estuary, where up to 14,000 Red-throated Divers have been recorded. Spring migration has always been very swift, for example start from the wintering grounds on the 29th of March and arrival near the breeding areas as early as the 11th of April.