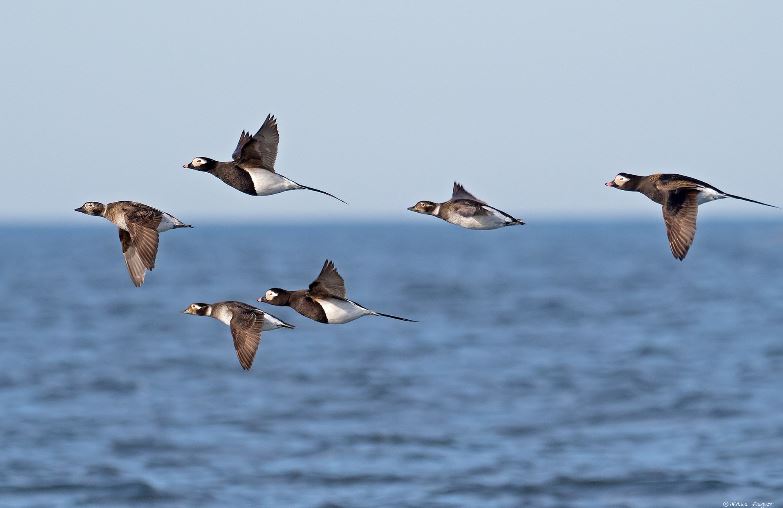 The majority of the birds breeding in Finland are migratory. Finland is also of special importance as an international migration pathway. In particular, a vast number of birds breeding in Northern Russia migrate through Finland. Even the majority of the European or world population of some waterbird species breeding in the Russian tundra pass through Finland every spring and autumn, so the Finnish migration routes of these species are particularly significant on a global level.

The location of the birds’ migration routes is mainly influenced by the target direction of their migration, geographical factors and climatic factors. In principle, the birds aim to migrate the shortest possible route between the breeding and wintering areas. In practice, however, the migration routes do not follow a straight line. Geographical factors as well as the locations of important staging areas define what is the most suitable route for a species. The migration route can also vary between years or within the season according to the prevailing weather conditions, such as the wind direction and rain.

The main factor directing the migration in Finland is water bodies. As a rule, terrestrial birds avoid crossing large water bodies on their migration, whereas waterbirds prefer to migrate along watercourses. A species group that especially avoids water bodies is large birds of prey, which use thermals when migrating.

The migration concentrates particularly when a land or water area forms an obstacle for the birds and forces them to deviate from their main migration direction. The autumn migration of the birds of prey that follows a broad front inland concentrates at the southern coast. When the birds reach the coast, they turn to follow the coastline east or west. The spring migration of arctic waterbirds concentrates at the northern coast of the Gulf of Finland, because the birds’ target direction is northeast, but they stay on the open sea and follow the coast as long as they can, because they avoid flying over the land.

The flying altitude also varies because of topography: on open sea areas and partly also on large inland lakes, e.g. waterbirds and geese often fly near the water surface. As the birds move over the mainland, they rise higher.

The migration does not always follow the same route. The main factor affecting is the wind. The variations in wind direction and force affect the migration speed and altitude as well as the location of the migration.

Birds normally try to start their migration with a tailwind, when flying consumes least energy. However, the migration legs of many species are so long that the wind conditions regularly change during the journey.

The autumn main migration route of the Common Crane can vary over a hundred kilometres in the east-west direction in southern Finland depending on wind direction and speed. A strong westerly or northwesterly wind directs the flocks further east, and correspondingly, an easterly or northeasterly wind further west. The spring migration of Arctic birds in the Gulf of Finland passes close to the coast or even partly over the mainland when there is a heavy southerly wind, but stays on the open sea in westerly and northerly winds.

The migratory route can also shift when the birds avoid unfavourable weather such as a precipitation area. In some years, massive autumn migration of arctic waterbirds can be seen in Central Finland, hundreds of kilometres west to their main migration route, when the birds leaving from the White Sea with an easterly wind try to avoid large catchment approaching from the south, making the birds to devoid from their regular migration route.

National main migration routes were defined as areas where a significant migration is concentrated each year.

Selection criteria for routes and species

The main migration routes were defined for the large and medium-sized bird species whose populations are known to migrate regularly along the same routes each year, and for some broad-front migrants whose migration is strongly concentrated by geographic or climatic factors. The routes were defined for species that migrate mainly diurnally, because there is little information on the nocturnal migration, which is also suspected to follow a broad front. However, many species covered in the analysis migrate both diurnally and nocturnally.

To determine the main migration routes in Finland, we used the sightings reported in the Tiira observation database during years 2006-2013, the migration routes defined by the regional ornithological societies and other published studies, as well as regional experts’ knowledge on bird migration in the region.

As for the observations reported to the Tiira database, a limit value for the daily number of migrants was set for each of the species considered, and the sightings exceeding that value were regarded as a baseline for determining a nationally significant migration route. The draft of the main migration routes was compiled according to the Tiira database, and the routes were then modified based on the expert opinions and the other information sources.

There are also many bird species that have not been covered in this analysis, although their migration clearly follows routes either in spring or in autumn. However, the migration routes presented for other species represent the main migration of such species as well, because their migration is directed by the same factors, and thus they follow mostly the same routes as the species included in the report.

Only those areas where intensive bird migration happens in a yearly basis were defined as main migration routes.

There are some obvious errors that must be considered when using birdwatchers’ reports as a base for defining the migration routes. Observation activity is not equal throughout the country, but the number of birdwatchers in the southern and western coasts is multiple of that in inland areas and Northern Finland. Therefore, an intensive migration is more likely to be observed in areas with lots of birdwatchers. In addition, there are large gaps between the known migration hot-spots, in which no observations indicating significant migration have been made, likely because of the lack of suitable migration watching sites or birdwatchers keen on counting migration. Hence, the lack of records does not always mean that migration does not occur in a given area.

The choice of the migration monitoring site is not random. It is influenced by e.g. the sites’ accessibility, the extent of the view that opens from the watching point, and the birdwatchers’ habits and assumptions, among other things. On the coast, for example, the monitoring often concentrates on the certain tips of peninsulas, from where the highest number of migrants is consequently reported. The main migration route may still be quite far away on the open sea or even over the land, depending on the species.

The monitoring is also focused on the sites assumed as the “best” observation sites. Such observation sites favoured by birdwatchers have been established over the decades as the places where most birds can be observed. In that case, the migration occurring in the close areas, albeit being slightly weaker, may not be reported. In eastern Finland, for example, the monitoring of the migration of arctic waterbirds in autumn traditionally concentrates in a handful of sites along the eastern border, and monitoring is scarce on the western edge of the species’ main migration route.

Due to the above mentioned sources of error, examining routes only by the numbers of observed migrants would sometimes give a false impression of the routes. The final definition of the routes is based, besides the observations, on the knowledge of the birds’ migration behaviour, such as the preferred direction of the species and their tendency to follow watercourses and other geographical features, as well as on the knowledge of the bird migration experts working across the country. Information on the birds’ staging areas and the routes they use outside Finland, especially the routes along which they are likely to enter Finland, has also been utilized in defining some of the routes.

Summary of the main migration routes in Finland

Most of the large birds breeding in Finland or passing through Finland winter to south or southwest of Finland. Therefore, the target direction of their migration is north-northeast in spring and south-southwest in autumn. The most important geographical features that direct the bird migration through Finland are the Baltic Sea and the White Sea, around which the primary staging areas are also located.

The migration routes in Northern Finland are poorly known. It is likely that there are not many specific routes due to the lack of geographical features directing the migration and the low number of birds breeding in the north.

Download maps of the main migration routes in GIS-format: